Councilman, mayor at odds over budget 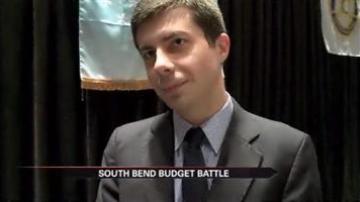 SOUTH BEND, Ind. -- South Bend city leaders are in the final stages of crunching the city's budget. Mayor Pete Buttigieg is trying to gain enough votes to get his budget passed, but not everyone is on board, including one councilman.

According to Henry Davis Junior, a meeting with Mayor Pete Buttigieg became heated last Wednesday when Davis told Buttigieg he did not support the proposed budget because it didn't address issues his constituents have raised.

We asked the mayor about it.

"My preference is always to work with fellow elected officials and I'm always looking for a way to make that happen. There is always going to be controversy that's part of how politics works. But I believe that our city is doing best whenever it's possible for elected officials to be pulling in the same direction, if not on every issue than on as many issues as we can,” said Buttigieg.

We again asked if it was true that he made that comment.

“Again, my preference is always to work with fellow elected officials not against them, You know we all have our job to do and we all have different perspectives, and our city's best off when people are cooperating,” said Buttigieg.