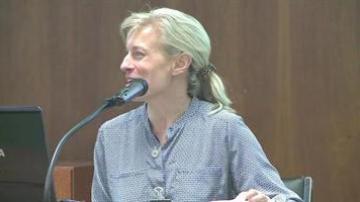 Councilwoman Valerie Schey has been the voice of this proposed bill that she says will better the lives of animals and the people of South Bend.

The new ordinance was passed with 8 out of 8 council members in support.

A large line of South Bend residents stood in line to say why they support the changes and no one stood up to oppose it.

One of the issues brought up was the law for a habitual animal abuser.

Before, that matter was not addressed.

Now, a habitual offender could face jail time and a fine.

"I came home after a long shift at 4:00 am to find that my sweet Lexie had beaten to death by my boyfriend at the time who was also a police officer," said Officer Jen Gobel. "I am here today because these animals do not deserve the treatment they received. In hindsight I now realize he had been beating both of my dogs while I was absent from the home. That particular case attracted national spotlight. It was at that time I realized how weak our animal cruelty laws were. Being as, he killed my dog and only got a misdemeanor."

Another matter brought up was the issue of spaying and neutering.

In the bill, a Trap-Neuter-Return system will be put in place.

There will be a small community responsible for watching the stray animal population in their neighborhood.

According to Schey and animal health experts, this will drastically reduce the number of stray animals in South Bend.

Council member, Dr. Fred Ferlig, did have a few amendments he'd like to make regarding Pit Bulls or other considered "dangerous" breeds.

He'd like them to have them wear muzzles and be subject to smaller confinements.

The council said they'll address that issue in the coming weeks.