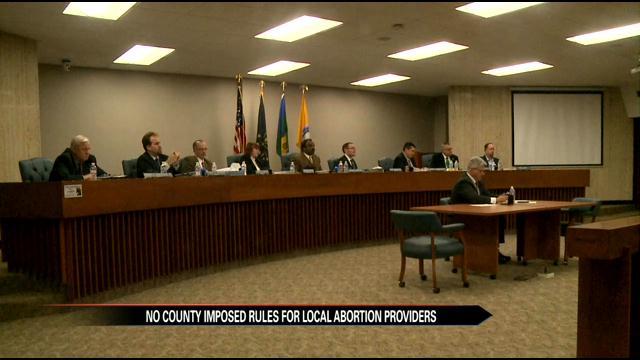 A divisive patient safety bill that would force abortion doctors to have admitting privileges at hospitals was voted down Tuesday night by the St. Joseph County Council by a vote of 6-to-3.

This vote means there will be no county imposed rules for local abortion providers.

State law does not require hospital privileges for doctors who perform abortions.

Hundreds of people packed the meeting room to voice their opinion on this controversial topic.

Supporters of the bill argued that it was all about safety, not limiting abortions.

But opponents say it is just another way to make abortions more difficult to get locally.

“It was completely unnecessary for the community so I'm pleased that further restrictions to abortion care were not implemented in the South Bend, St. Joseph County area,” said Scott Wells, an Indiana University South Bend student.

Council member Dan Herbster, the co-author of the bill, announced his resignation immediately after the measure was voted down. He will be leaving to join the U.S Army.

That leaves a vacant seat for District F of the County Council. An election will have to be held to fill that position.