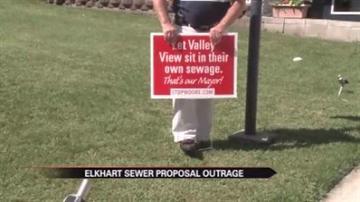 ELKHART COUNTY, Ind. -- Although the Elkhart City Council voted in favor of a sewer proposal that requires sewer customers outside of the city limits to pay a fee based on usage, the mayor says he will exercise his right to veto it.

If the mayor vetoes the measure, customers would have to pay the current fees that are much higher.

Sewer customers are upset. When the meeting ended Thursday night they were happy that the ordinance passed. It was the one Valley View residents and business owners were happy with.

They said they didn't know the mayor planned to veto the ordinance until they got home and watched the news.

Valley View homeowners say they had no idea that eight months later they would still be agonizing over sewer rates.

"Unfortunately our water bill has not gone down it has gone up a little bit. You've got a choice, flush a toilet or take a shower, you can't do both at one time," said Valley View homeowner Jay Corson.

"I know the mayor and I know he would veto anything that he didn't create," said Valley View homeowner Jon Nelson.

"A customer in the city of Elkhart was paying $18.34 for the same utility bill that I was paying $84 for. I don't mind paying the difference but a three times multiplier, a $50 compact?" said Treece.

Elkhart County business owners said they are planning to make one more plea to the mayor before taking him and the city to court.

Homeowners say they will be right behind them because they feel trapped.

"It's totally upsetting to everybody and there are a lot of people that just want to turn their back on it because they don't know how to deal with it," said Nelson.

The mayor's attorney says once the council president signs the ordinance that was voted on Thursday night, the mayor has 10 days to decide if he wants to sign it or veto it.

It may be a few weeks before this is resolved.