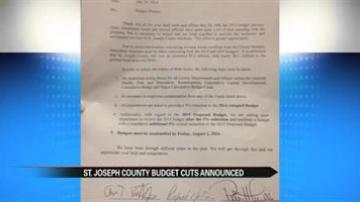 ST. JOSEPH COUNTY, Ind. -- St. Joseph County department heads were notified Friday that they need to cut 3 percent from this year's budget - and they only have one week to do it.

The county projects losing $7 million because of the Circuit Breaker program that limits how much counties can raise property taxes.

They believe St Joseph County will lose over $7 million in 2014, which is 10 percent of the county's budget.

Both must be submitted by Friday.

"If St Joe County was the only one going through this, then you would probably really have a story. But this is the reality of property tax caps and circuit breaker," said Rafael Morton, St. Joseph County Council President.

Morton says these budget cuts and layoffs through attrition have to happen so the county doesn't get into bigger budget trouble.

"Unless there's a major change in the assessed value of properties, then that number, as far as the impact, is only going to get bigger," said Morton.

So why is this happening now?

Council President Morton says it is because of Circuit Breaker.

"There's no way that we knew that when this legislation was enacted, that the devastation would be at the level that it is," said Morton. "We were hoping that the level of property tax payments would be higher than they have been."

We called 15 departments to see how the budget cuts are going to affect them, but they said it is too soon to tell.