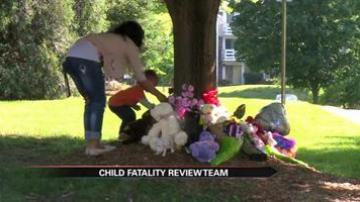 ST. JOSEPH COUNTY, Ind. -- St. Joseph County announced Friday it is re-starting its Child Fatality Review Team, which was shut down last year. After the high profile deaths of Tramelle Sturgis and Shirley Mundia, many say it is the right time to get the group back together.

"Everyone who lives in this community and is part of this community certainly wants to do all that we can, to see what we can do to avoid the deaths of children," said Michael Dvorak, St. Joseph County Prosecutor. "What the Child Fatality Review Team does is try to analyze, outside of genetic disorders or any other reasons, what kind of behaviors may have led to that child's death," said

This is not the first time St Joseph County has had a Child Fatality Review Team.

An earlier version of the team was dissolved last year when the legislature passed new rules.

"That hit all of us hard and I think all of the people that were participating were extremely disappointed that the team would not be able to go forward," said Dvorak.

The new team will tackle major tragedies like the deaths of Tramelle Sturgis and Shirley Mundia as well as accidental or unexplained deaths that we rarely hear about.

The goal is to try to develop programs to prevent those deaths.

"It sounds simple but things like the low hanging cords on the blinds in your house, to raise them so the toddlers can't choke to death on those sorts of things. It sounds small but if anyone loses a child because of that, it's not small to them," said Dvorak.

Dvorak says all of the previous agencies that were involved have returned with the team, such as the hospital, DCS, and law enforcement.

He also says, there are some new faces, but many of the former members of the team came back.