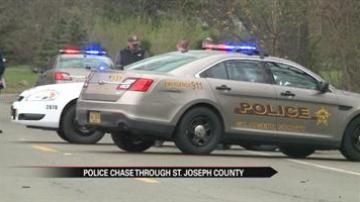 South Bend, Ind. -- A woman and her husband experienced a terrifying drive through town as they found themselves right in the middle of a police chase. One pick-up truck chased by nearly a dozen police cruisers down a long stretch of Ironwood.

“I've never been so terrified in my life, really," said Pam Ogren who witnessed the crash first-hand. Ogren and her husband are relieved and out of danger. While they were driving on Ironwood Road, a speeding truck and a caravan of police cars sped up behind them.

Normally, when emergency vehicles are behind you, you pull of to the right to let them go by. But, Pam's husband had a gut reaction that said don't do that. "If we pulled to the right, we’d be dead right now. There’s no doubt in our minds,”said Ogren.

Instead, her husband continued in the middle of his lane while the truck and cruisers quickly came up to the right side of their car. That's when the Ogren's realized what could have happened.

Police say the pursuit started at the Meijer on Grape Road in Mishawaka. Two people accused of shoplifting ran from the police. The chase continued down on Ironwood for some time before eventually ending at the corner of Ironwood and State Line Road. The suspects took off on foot and police eventually caught the driver.

After their frightening experience on the road, Pam said she is incredibly grateful. "We went to dinner an hour and half later and I said, we’re gonna celebrate life,” said Ogren.

The driver of the truck is in Cass County Jail and will be arraigned on Monday. The passenger is still on the loose.
Share this article: