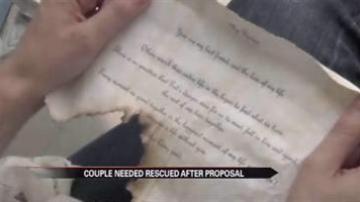 NORTH ISLAND, Mich. -- Nothing says happily ever after like getting stuck on an island.

A Michigan couple rowed out to Lake Huron in a canoe where Nathan Bluestein proposed to May Gorial last weekend.

But when the current picked up, they got stuck.

Eventually they washed up on North Island and needed to be rescued.

Despite the rocky proposal, the wedding is still on.

It is planned for next April.