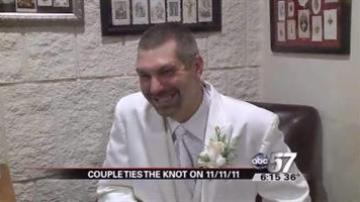 There were a number of special events for today's special date.  One was a wedding, held at 1:11 p.m.  The reception was at 111 Woodward Lane.

The bride Amy Burch, says she and her husband Jeremy chose the date because he proposed to her exactly one year ago.  The priest chose to make their day even more special by setting the start time at 1:11 p.m.  The reception's address at 111 Woodward Lane, well that was just a coincidence!

Jeremy and Amy got married today at Queen of Peace Catholic church in Mishawaka.
Jeremy and Amy have known each other since Amy was fifteen.  Amy's cousin was Jeremy's best friend.  As luck would have it, they reconnected around two years ago on Facebook and have been together ever since.

"He is just amazing.  He is everything that I have prayed for all of my life and we have known each other since we were like fifteen years old.  He was my cousin Chris's best friend," said Amy Burch.

Jeremy and Amy told me they feel lucky to be marrying each other on this lucky day, and they said they sure won't forget their anniversary on 11-11-11.