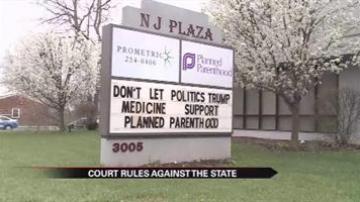 Indiana cannot cut funding for Planned Parenthood because the organization provided abortion services according to a court decision.

The 7th Circuit Court of Appeals upheld a portion of a lower court ruling that said Indiana could not enforce a state law that barred abortion providers from collecting Medicaid funds for medical services. Some of those services included cancer screenings in addition to abortions.

In June 2011, a judge blocked portions of the bill and the state appealed the ruling.

The newest ruling upheld  the lower courts order that said Indiana did not have the authority to exclude a medical provider from Medicaid funding. That lower ruling stated that the law violated  patients' rights to obtain medical care from a provider of their choice.

The appeals panel also ruled that the lower court needs to modify other portions of the preliminary injunction.