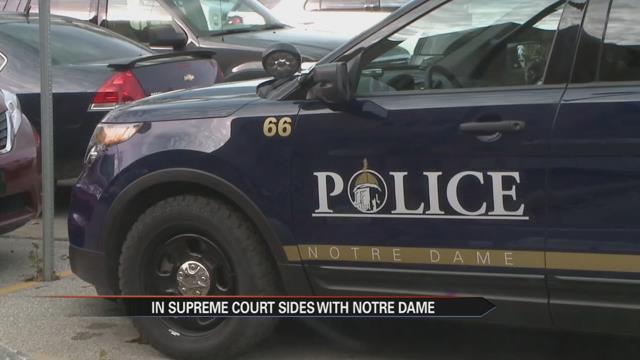 “We welcome the decision, obviously but it doesn’t surprise us,” said Paul Browne, Vice President of Public Affairs at Notre Dame.

Before Wednesday's decision, his lawsuit had been part of an ongoing saga between the campus and ESPN since 2014.

The matter went to court after the department declined to hand over any paperwork.

ESPN lost in local court, appealed the ruling and won.

Then, the university appealed and took it to Indiana’s highest court.

“It was so clear in the law that police departments at private institutions are exempt," said Browne.

Court documents show the judges in this appeal found the university’s police force was not a law enforcement agency.

“We too found that a private university police department is not a “public agency” for the purposes of the [Access to Public Records Act],” one judge opined in Wednesday’s ruling.

While the department can maintain its privacy after this decision, the campus says it’s also working to maintain transparency.

“We keep a log of any crime committed on campus and that’s open to inspection to the media or the public at all times we have it online, etc,” said Browne.