Covert Public Schools out of money, could close 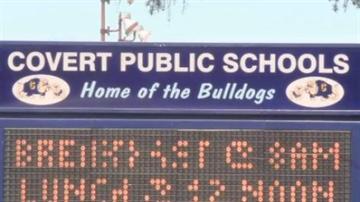 COVERT, Mich. -- Covert Public Schools are facing a cash flow crisis. In the next week school board members will have to decide whether to keep the schools open - or just call it quits.

"Everything is going downhill and I don't know if it is going to come back again," said Julie Aguilar, a Covert resident.

School board officials have confirmed that the district is nearly broke. There is only enough money to keep school in session until October 18th.

"I don't know. There is no sense in staying open if you are going to cut everything," said Brandy Dailey, a Covert resident.

Brandy and her husband both went to covert public schools and now her kids go to school here too. She is afraid that too many teachers are leaving.

"There have been about 5 or 6 teachers that have resigned just recently since all of this has taken place.  There is Miss Masheky, Mr. Smith, Mr. Beach, there are only like 5 teachers left for the 6th through 12th grade," said Brandy.

Some parents have already moved their kids out of the district.

"The education system here has been going downhill ever since a couple of years or what not. And this town is not really bringing in revenue. The only revune coming in through this town is probably the school, so if the school is not going to be here, where is it going to come from" said South Haven resident Marlon Hyler.

Those who are still here are worried.

"You know our kids could be in jeopardy, at the schools. I mean what are we going to do if this doesn't pass? Lets come up with another plan and work through it, everybody work together on this thing," said Covert resident Greg Schanar.

Parents say that they have seen this coming for a long time but it is still hard to watch happen,
School board members will meet Monday night to decide what to do.