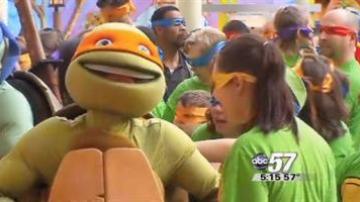 BLOOMINGTON, Minn. -- They have come a long way from the toxic ooze-infested sewers.

Now the Teenage Mutant Ninja Turtles have helped the Mall of America to secure a new world record!

This past weekend, the Mall of America and Nickelodeon UNiversal attempted to break the Guinness World Record for the largest gathering of Ninja Turtles.

A representative from the Guinness confirmed that there were 836 Ninja Turtles there.

That's more than the previous record of 786.