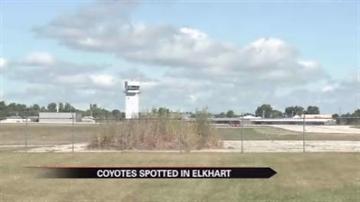 ELKHART, Ind. -- The Elkhart Municipal Airport is having problems with coyotes nearly causing accidents as planes take off and land at the airport. The airport has been give permits from the Indiana Department of Natural Resources to kill the coyotes to keep pilots and their passengers safe.

Pilots need a clear runway to take off and land safely.

Lately, there have been so many coyotes, that they've become a safety hazard for the planes.

Airport officials say a few times, pilots have had to make last minute changes to their take off and landing patterns to avoid hitting one.

At first, officials tried to trap the animals to move them elsewhere.

Now when a coyote is spotted too close to the airport, orders are to shoot to kill.

It's the only way to avoid disaster on the runway.

"Because there really is no other way, especially when you are talking about deer and coyotes," said Dowdle.

The airport has permits from the DNR to shoot deer and coyotes.

Already this year, three coyotes have been killed and there are still several more out there.