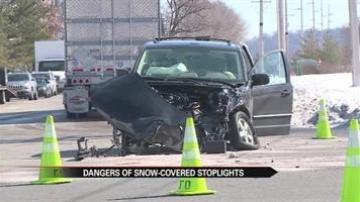 ELKHART COUNTY, Ind. -- A truck and a van collided at the intersection of county roads 17 and 14 in Elkhart Thursday afternoon when the truck ran the stop light. Firefighters said snow-covered lights may be to blame.

At the intersection of county roads 17 and 14, traffic moved at a snail's pace while the accident was cleaned up.

"In an accident like this, busy highway in an intersection we want to shut everything down to protect the rescue workers and until we get the patients out and the debris cleaned up," said Ken Davis, Firefighter-Paramedic for the Concord Fire Department.

Investigators say a Ford F-150 ran a stop light on CR 17 and the driver of a Dodge Caravan slammed into it.

"Obviously road conditions here are not a factor, but given the storm we had yesterday there still could be some snow on the lights that may cause that," said Davis.

Up and down CR17, it was difficult to tell whether the lights were red or green.

"It's really hard when you're traveling at 55 miles an hour and depending on how the sun's facing it's really hard to see sometimes if they are snow covered. It's really difficult at times," said Davis.

Officials say your best bet is to slow down until the snow melts.