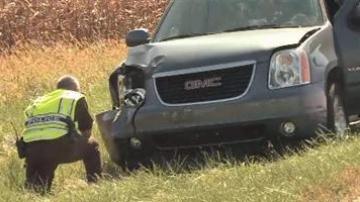 BREMEN, IND.-- Investigators say they're not sure if the 20-year-old South Bend man, who died Thursday in a crash along state road 331, was walking in the road or on the shoulder.

The man was walking his bike south in the northbound lane when he was struck by an SUV. He was taken by helicopter to Memorial Hospital where he died Thursday afternoon of severe head and neck trauma.

"We received a call from some passersby that a male party had been struck while riding his bicycle along state road 331 here just north of Bremen," said Lt. Matt Blank. "He was struck by the vehicle and sent into the ditch."
The driver of the vehicle is a 33-year-old Bremen woman. Her name has not yet been released. She was driving a gray Yukon northbound at the time of the crash. She is five months pregnant and was rushed by ambulence to Memorial Hospital for an evaluation.
Police are hoping more witnesses will come forward to help piece together the events leading up to the crash.
"We don't have a whole lot of information at this point. We only have one witness that has come forward. We're looking for anybody who may have seen the accident to contact us," said Blank.
No names have been released at this time.
Share this article: