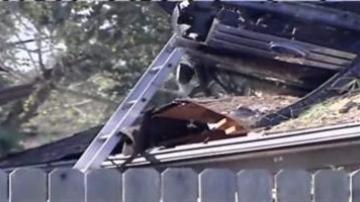 HOUSTON — A Texas driver walked away from a bizarre crash with barely a scratch.

Houston police said that the driver may have been speeding and missed a curve in the road.

They said the driver hit an embankment, which launched him in the air crashing into one house and then landing upside-down on a second house.

The driver has not been charged with a crime. And investigators said they will be will looking into whether alcolol was a factor.