Creeping vines cause small fire, hazard in southeast side alley 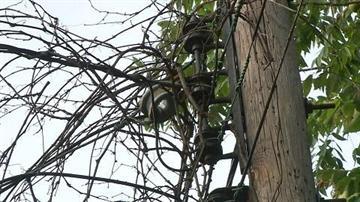 Just before 3:00 p.m. residents in the area heard the snapping and popping of sparks coming from the power lines as the vines bridged them together. A small fire was seen on one power pole nearby.

The vines have grown unchecked for years, according to one resident on the block and are now entangled in the lines. It is a problem that has been slowly creeping into existence.

The alley where the root of the problem started was vacated more than two decades ago by the city, at the request of a business wishing to connect two pieces of property the alley dissected. A year later the business moved on.

After the alley was vacated, maintenance of it fell to the homeowners. In recent years, however, homes in the area have become abandoned. With no one maintaining the majority of the alley, the wild grape vines spread and grew.

Today, the alley is only accessible from the south side. In the northern third of the alley, vines reach thirty to forty feet in the air riding on the backs of tree branches; crawling up the sides of power poles and; clinging to electric wires.

After the fire was put out, a power line repairman fixed the damaged parts but did not remove the source of the problem. As of 11:00 p.m. Monday, one resident was still without power.

Oliver Davis, a member of the South Bend Common Council, represents the district the problematic alley is in. He says the alley is an example, albeit an extreme one, of the need to continue to clean up the city. “The city has done a great job with the graffiti project, and now we have to move forward to make sure that we can do the best with our alleys,” said Davis.

Davis plans to follow up with the resident whom is without power Tuesday, to see if that situation has been resolved. He also plans to see what he can do about getting Indiana Michigan Power out to clear the vines from the lines as soon as possible.