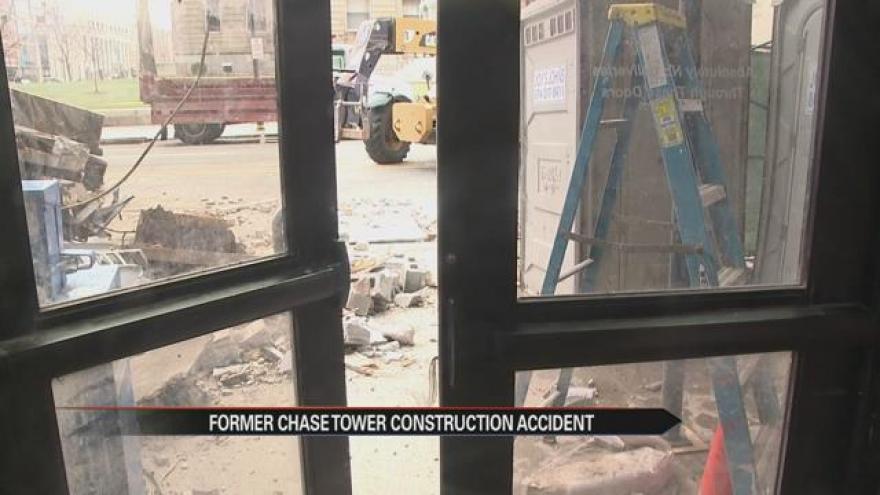 On Wednesday, construction crews working on South Bend’s new Aloft Hotel took a break from building and focused their attention on cleaning.

On Tuesday, ABC 57 News first told you a significant and rather larger piece of the city’s former Chase Tower fell from the seventh floor before crashing onto a sidewalk canopy.

One person was injured and that construction worker suffered non-life threatening injuries and has already been released from the hospital.

On Wednesday, the attention was focuses less about construction to the city’s new Aloft hotel and more on the public’s safety.

24 hours after strong winds caused a concrete parapet wall to fall from the seventh floor of the tower, construction crews worked to clean the debris.

According to Aloft’s project manager, Theodore Tsiokas, this sidewalk canopy saved the lives of three construction workers who were directly under the path of that massive parapet wall.

“What we did is we took rest of parapet wall that was unsafe as precaution and we didn’t let anyone drive we have cars in building didn’t let drive out as precaution because public safety number one for us and we cleaning up now and Friday new sidewalk shed installed, rest of building safe it’s the way they built that parapets wall, rest of building in good integrity because they built concrete,” said Tsiokas.

Washington Street is expected to be open for both pedestrians and vehicle traffic by Thursday.

Tsiokas is evaluating whether or not the hotel can still open by June 2017.