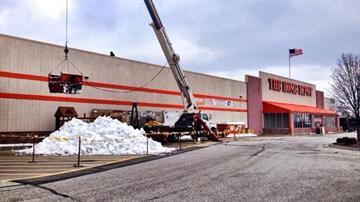 MISHAWAKA, Ind. -- Home Depot in Mishawaka was closed Friday for the second day in a row. Thursday morning the roof of the building began to sag - making it unsafe to be inside.

Before shoppers can walk through the doors again, the store has a lot of work to do.

Because of snow accumulation on the roof, the roof trusses began to sag.

Home Depot hired Lutz Roofing to remove all the snow from the roof.

Cranes worked all Friday to clear the roof, but only removed snow off half the building.

The Mishawaka Fire Department said the roof has four inches of ice and over four feet of snow on top of that.

Once the snow is all removed and the ice thaws and drains off the building - Home Depot will then reopen its doors.

"They're in the process of removing the snow. Once we get that done, we'll see what repairs need to be done and have it inspected. We won't reopen until we're certain it is safe for customers and associates."