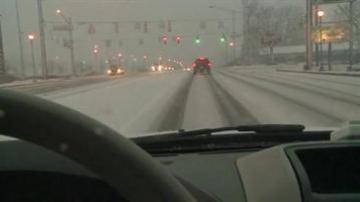 SOUTH BEND, IN -- Extreme weather conditions could make for a messy morning commute.  INDOT officials say they're taking all the necessary precautions to make sure the roads are as safe as possible.

"We attack the roads when we do plowing and salting," says Matt Deitchley, the media spokesman for INDOT.  "But the extreme cold can make that more difficult."

With temperatures expected to drop to the teens, the normal road treatments just aren't as effective.

Despite INDOT's best efforts to make the roads safer, sometimes the weather is just too extreme.

"That's one of the worst surfaces in the world to drive on is black ice," says Bill Wagner, the president of Frick's Driving School in Mishawaka.

He warns drivers to always be aware of their surroundings, especially in extreme conditions, accelerate and decelerate slowly to keep traction, and to drive slower, since everything takes longer on snow covered roads.