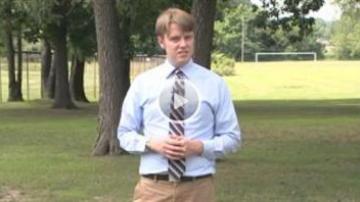 City workers in Buchanan didn’t start the day Monday expecting to be heroes, but after rescuing a trapped dog they’ve earned the title.  Department of Public Works crews had just started cutting the grass at McCoy Creek Recreation Area when one of them spotted the dog trapped and sunk almost completely into a mudhole near the baseball fields.

"I noticed some movement, as I stopped to investigate more I noticed it was the head of a dog," described Craig Miller, the worker who found the dog.

Miller called for help from two other crew members.  He says the dog was obviously struggling and in desperate need of help.

"It was stuck all the way into the mud, just the head was sticking out and he was trying to stay above water," Miller explained.

Miller waded into the mud to pull the dog out.

"I went in and grabbed him and pulled the dog out of the water,” he described.  “It wasn't moving very much until we started cleaning it, it eventually started picking it's head up and trying to move a little bit more."

They took the dog back to their station nearby and cleaned it off before contacting the dog catcher.  They took a picture and posted it on Facebook, hoping somebody in the tight-knit community would recognize her.

"This morning a buddy of mine…called up here and somehow on Facebook from one of the city guys downtown he figured it out, he recognized the dog," explained Jeff Breland, the dog’s owner.

Breland has owned Sarah for all 15 years of her life.  He tracked down the dog catcher and picked her up, hardly recognizing her through the coats of mud still stuck to her.

"She was muck from one end to the other," described Breland.

Sarah has problems with her back legs, she can barely walk around the house without Breland’s help.  So, he was very surprised when she disappeared on Sunday morning.

"I didn't really think she could make it more than the end of the block actually, her rear-end is going out on her," Breland explained.

Those leg problems are why, unfortunately, he had already scheduled to have Sarah put down.  But, he and his family are thankful they have time to say goodbye.

"It's just such a hard thing to do so we're just all kind of having our last times with her and everything.  But, she decided to kind of take off on her own there and have that great last adventure apparently," Breland explained.

Breland says he will take Sarah in to be put to sleep later this week.  He and his family want to let all the workers who saved Sarah to know how thankful they are she gets to spend her last days peacefully in their living room.