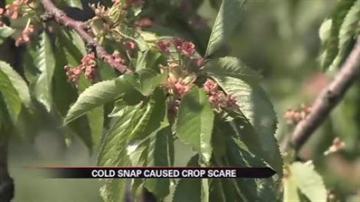 BERRIEN COUNTY, Ind. -- Farmers in Berrien County say just as temperatures were reaching their lowest point Sunday night, a cloud moved into the area. They believe the cloud kept the temperature from dropping even further and that could make all the difference as they look for damage to their crops.

"I felt the leaves to see if that was really frost. And some of the lower areas had a little more frost than some of the high areas, and then I just waited for the sun to come up and tried to push it up faster,” said Bob Woods, owner of Springhope Farm.

It will take a few days to know the full extent of the frost's damage.

But he's checking the apples, the most susceptible at this stage of growth.

"If the frost just happens to hit the ones that are in bloom, well we still have more opportunity,” said Woods.

The sweet cherries will ripen in late June

Followed by peaches in August.

Thankfully- Woods is only seeing minimal damage so far.

"We'll watch the little fruit-lets [sic], if they swell and grow normally, then we'll feel pretty good about it,” said Woods.

Last year's freeze ruined everything and Springhope Farm relied on insurance to cover the costs.

"Last year we lost virtually everything. We had a few honey crisp apples last year and nothing else,” said Woods.

He feared Sunday night there would be a hard freeze like last year.

"It wasn't good. We pretty much had a lot of the expenses and very little income,” said Woods.

Many growers have moved their fruit trees from the lower lying areas because of last year's freeze.

The cold air tends to sink, doing the most damage in the low lying areas.