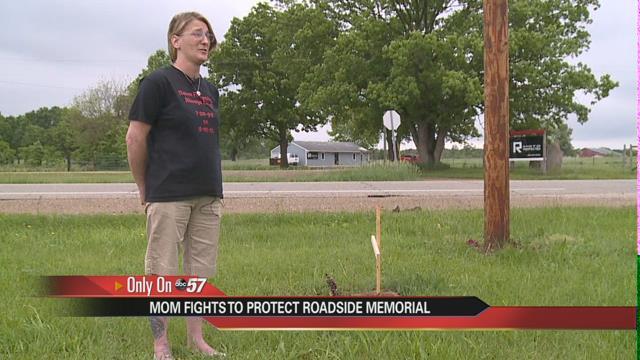 A grieving mother is frustrated because the crosses at her late son's memorial keep disappearing.

A lack of state legislation could be contributing to this mother's grief.

Since his death, Stevens has had to install 6 crosses at the crash scene and says she has no idea who could be taking them.

“As a mother, it breaks my heart,” says Stevens. “I don't understand why they're stealing from my kid, he never did anything.”

Saturday marked the sixth time in only three months a cross has been taken from the crash site.

“I talked to the road commission, I've talked to MDOT,” says Stevens.

Both departments tell her they did not remove the crosses and they say they checked their trash to make sure and came up empty-handed.

Stevens said her son was well-liked by the community and she can't think of any enemies that would steal the crosses.

“There were over 350 people at his funeral,” says Stevens. “He had the kindest heart in the world.”

While the state of Michigan does not have a specific law banning roadside memorials, it does have laws about roadside hazards.

The law states anyone can legally remove a memorial and it won't be considered vandalism or theft.

So, as Stevens looks at her newly placed cross she hopes it makes it through the night.