Crossing borders to see the Irish 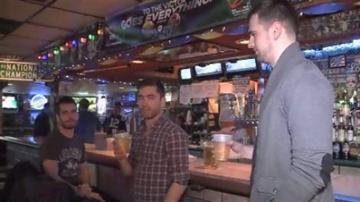 SOUTH BEND, Ind. -- While you were sleeping, some folks chose to hit the road, and headed to South Bend, Indiana.

We caught up with three men who made the trip from Canada to watch the big game. They say it took a day's drive, and some planning.

Their group, consisting of a former professional soccer player, a male underwear model, and a close friend. All three drove here from Toronto to soak in all the Fighting Irish glory.

"We been to Brothers, we been to to a bunch of little campus parties; just hanging out having a good time" said Adam Chase.

They say the trip cost them a few hundred dollars, but it was money well spent to see the Irish play in the National Championship.

"My dad raised me on Notre Dame. I have been a fan for years, and have not missed a game in a few years. The national championship, you just have to be here," said Ian Cummins.

Cummins is originally from Ireland, and jokingly says he's a fan by birth, but a slip at the border almost cost him and his friends the trip.

"To be honest we crossed the border and my buddy Adam's passport was expired but the guy let us through. So we got a little bit lucky so were hoping it continues for the big game" said Bojan Celan.

The last time the men made the trip to South Bend was earlier in the season, when the Irish beat Wake Forrest.