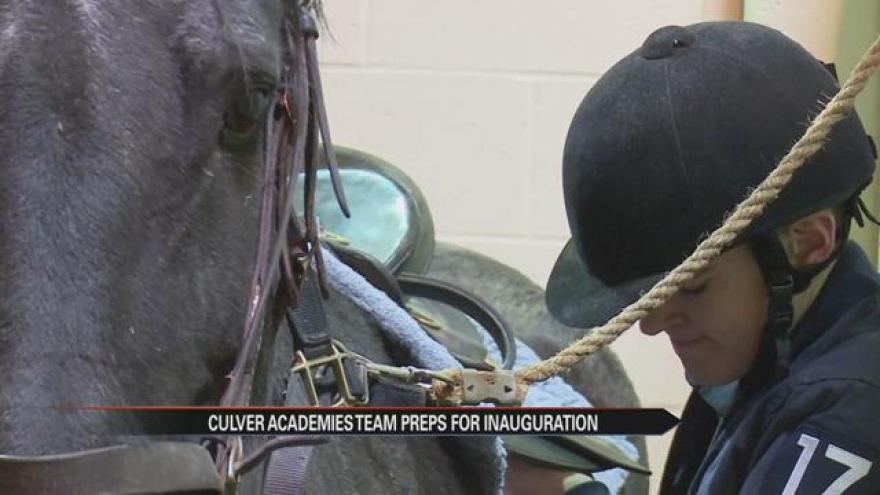 As the presidential inauguration draws closer, one local school is gear up, literally. The Culver Academies' Black Horse Troop and Equestriennes will be performing at their 17th inauguration.

ABC57 got an inside look at the program and it's longstanding tradition.  This inauguration is helping the program come full circle: the first inaugural parade they marched in was in 1913, when an Indiana governor became Vice President.

Now, more than 100 years later, another Indiana governor is being sworn in.

Ed Little is the Director of Horsemanship at the Culver Academies. This is his 7th inaugural parade he has prepared for.  His time these days are spent preparing to bring both the Black Horse Troop and the Equestriennes to D.C. for the presidential inauguration parade.

It's a bit of a challenge.

"80 head of horses, there's going to be 57 students from the Black Horse troop that are goin to be riding, and 23 girls from the honor organization," says Little.

But it's something he and the school look forward to every four years.

"Everybody takes this very seriously," he explains. It's a real honor and pleasure to be able to do this."

It's not his first trek down Pennslyvania Avenue.  But for some, it's still hard to believe.

"To think back four years ago, I had never touched a horse, and now I'm going to be a part of something so incredible," says senior Brian Krupp.

Krupp has heard about the many appearances at the inauguration, since he started school at Culver.

"It's pretty incredible, because the moment you step onto Culver's campus, that's the one thing that's really talked about," explains Krupp. "Are you guys going to be riding in the inaugural?"

The ride to this moment, has been a lot of hard work.

"We've been practicing about four times a week, and spending a lot of time with our horses, desensitizing them to get ready," says senior Jordan Blackburne.

The teams have been preparing for this since September.

Blackburne has heard it's worth the effort.  She's heard it from her father and two brothers, who all have ridden with Culver at a presidential innauguration.

For her, it's not just about Culver's legacy, but her own family's as well. You could say, it runs in her blood.

"I've had so many family members go through Culver," she says. "And to be a part of that tradition...I think that's something about Culver that's so unique."

The teams don't care about the politics or who is sitting in the president's seat.

They care about the tradition, and the honor.

"We're not really riding for a political belief," adds Krupp. "We're riding for the office of the presidency and for the tradition that's behind all of it."