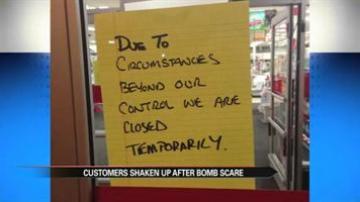 WARSAW, Ind. -- Police responded to a bomb threat at a Kmart in Warsaw.

“It makes me feel like I cant just go to the store and be safe anymore,” Kmart customer Cathie Zimmerman said.

A bomb scare had Cathie Zimmerman worried for her safety.

Police would not release details but did confirm KMart employees called Warsaw Police after they receieved the bomb threat.

“I don’t think I’ll go in the store tonight. It just makes me a little nervous,” one customer said.

“I hope that we can just go shopping and not have to worry about things like that. I’ve noticed that they upped security at the malls and that’s good. But is it really, do we really have to do that just to go shopping,” said Zimmerman.

The store said this was not just a kid playing around.