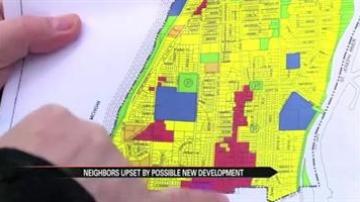 ST. JOSEPH, Mich. -- A small group of St Joseph, Michigan residents say they do not want a CVS store in their quiet neighborhood. They say they will keep fighting until CVS changes its plans, even though the company offered them financial incentives.

The residents of Myrtle Avenue just off Niles Avenue say they're not just concerned about the noise and the traffic the CVS would bring. They don't want their residential neighborhood to become "commercialized."

The developers pushing for the CVS recently offered what they say is a compromise.

In a letter, developers Jim Koch and Eric Harvey proposed donating $5,000 each to the 17 homeowners who would be most affected by the new store.

"It felt like a way of diverting our attention from the main plan which was to rezone the house at 711 and the ones on up on Niles," said Sue Stobbelaar, a resident of Myrtle Avenue.

"It just means that somebody knows it's not the right thing so now that means we just have to involve extra money for it," said Stanwood.

The rezoning proposal would take at least three residential lots and turn them into commercial property.

Neighbors say that would damage the value of their homes.

"Five-thousand dollars isn't going to counteract the loss in property value of when now you look out at what used to be a nice, peaceful, quiet woodsy area is not anymore," said Stanwood.

Residents say they'd rather see a small, local business move into the building that CVS is after.

They say the CVS should be in an area that is already commercial.

"This isn't a sprint, this is a marathon and I realize that, it's just frustrating that we can't get it resolved more quickly," said Rick Stobbelaar.

Homeowners say there will be another hearing in front of the St. Joseph Planning Commission April 12 at 4:30.

We contacted the developer's attorney for comment and we received the following response and photos.

Please post the following and the attached photo on your website, and do a follow up segment discussing the positives of our proposal and broadcast that tonight.

We offered other changes to the site design that would address the lighting, noise and traffic concerns. For instance, we have offered to build a decorative wall that would be covered with ivy and block headlights and noise. This would also have a natural appearance and prevent additional soil erosion.

The photo provided is a view from the homes on Myrtle as we had originally proposed. We have since offered to move the curb cut closer to Niles Avenue and provide additional space for larger landscape buffering. We have moved the pavement and parking areas that were closest to Myrtle, 17 feet to the east closer to Niles Avenue.

We continue to seek suggestions that the neighbors would like to see to the proposed plan, but we have received no direct suggestions from the folks on Myrtle.

We find it unreasonable that folks living a few hundred feet from a 5-lane State highway running through the heart of the City, don't expect to see growth and development along the commercial corridor. We want residents to participate in the planned growth for the area by helping design a site they would enjoy. The majority of the proposed site is already zoned commercial, and the funeral home is planning to relocate. The residents have an opportunity right now to participate in the design of the site, and I'm sure there are many things we can do to satisfy their concerns if we are given that opportunity. In fact, we held a meeting with 9 other residents in the neighborhood on Wednesday. We heard good suggestions about the need to provide better traffic safety for the homes north of the site on Niles Avenue by possibly improving an alley at the rear of those homes. A dear neighbor living on Kingsley suggested some additional changes to the site and building that we should consider. We hope the neighbors are willing to meet with us to discuss their concerns. I'm available at 317.284.5527. Eric Harvey