Dad proves there are other C.H.O.I.C.E.S. besides gun violence 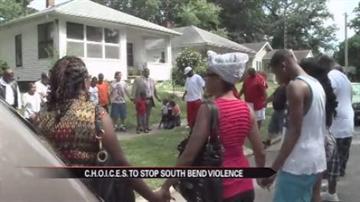 SOUTH BEND, Ind. -- After a series of three shootings that killed two people over the weekend, one dad is stepping up to bring the community together to fight gun violence.

He has created a group called C.H.O.I.C.E.S. and enlisted help from other dads and men around South Bend.

It stands for Communities Helping Our Inner City children Excel in Society.

“It is not the police’s fault. It is not the mayor’s fault. This is our community’s fault and the community has failed their kids,” said C.H.O.I.C.E.S. founder Michael Martin.

South Bend dad and business owner Michael Martin says he is at his wit’s end with all the teen gun violence in the streets where his kids play.

“I will not allow my kids to get on their bike and ride three blocks because you do not know if they are going to come back home,” said Martin.

So he is jumping into action by creating a group called C.H.O.I.C.E.S.

“As parents we have to step in to help these parents who are not raising their kids to raise their kids,” said Martin.

The group of men will be marching through the streets of South Bend to show gangs violence will not be tolerated in their neighborhood and to talk with kids about making better life choices.

I followed these civilian soldiers as they pounded the pavement.

One of the first stops they made was at the home where these two little kids live.

Their mother, 20-year-old Jarina Bailey was shot and killed over the weekend.

“It is going to be hard to tell them, because they are going to grow up without a mother,” said Taysaa Bailey.

Family, friends, and the CHOICES group held hands and prayed for the young mother and an end to youth gun violence.

When prayer was over, I talked with nine-year-old Tramya Brownlee and asked her about the gun violence where she lives.

“I’m sort of used to it, because it is an everyday thing. Everybody comes up dead everyday,” said Brownlee.

This is the type of sad reality Martin plans to fight against.

“So now it is time for us as a community and as parents to step in and deal with these kids,” said Martin.