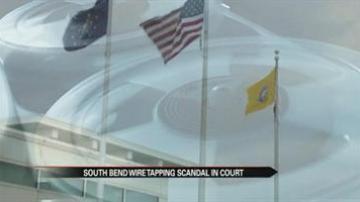 SOUTH BEND, Ind. -- One of the most complicated and controversial lawsuits to hit the city of South Bend is nearly decided. South Bend Police Department wiretapping scandal has been affecting the department for 3 years. A verdict is expected as early as Wednesday.

Back in 2011, South Bend Police officers were recorded on their office phone without their knowledge.

The department's director of communications says she listened to the recordings and allegedly heard unethical and racist remarks.

Multiple lawsuits stemmed from the revelation the phone lines were recorded.

The judge must decide whether it was legal for the police department to record the phone lines.

"You don't decide if something is legal to listen to, by first listening to it," says Ed Sullivan, who represents the city.

The officers who worked in the department didn't know their phone lines were being recorded.

"Officers didn't know what was being recorded, people had no idea about policies or procedures, and that's simply in violation of the law," says Sullivan.

South Bend's Common Council wants the tapes to be heard. The city believes if the recording system existed in the police department, then it was used for law enforcement purposes only, and it couldn't just be turned off if something possibly inappropriate was being said.