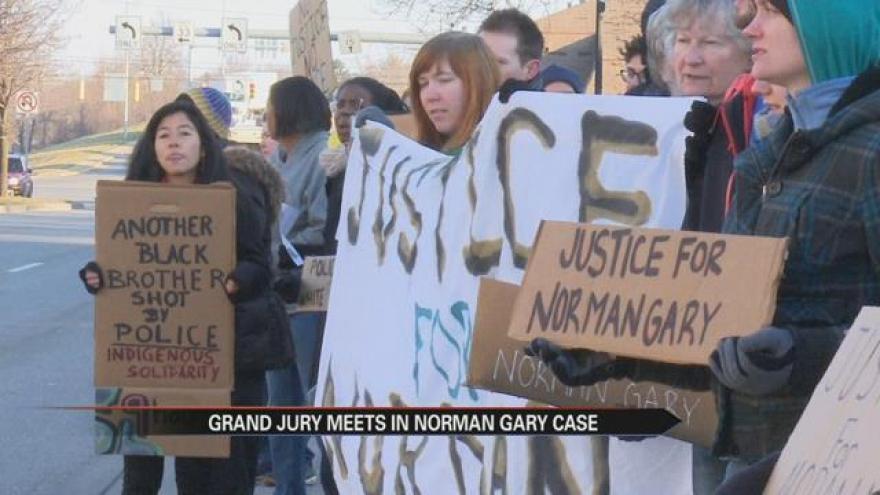 On Monday, a grand jury met for the first time in hopes of determining if the two officers involved in Norman Gary’s death are at fault.

Both of Norman Gary’s sisters are not taking this lightly and both agree it’s like reliving the moment their brother was taken away from them over and over again.

Lameka Gary, one of his sisters, goes on to say she would’ve taken that bullet for her brother.

“We were best friends and they took all that from me. If I had been there that night I would let them take my life because he has two other beautiful babies and a beautiful mom.”

On December 4, 2016 Officers  Nathan Lanzen and Leonard Dolshenko fired their weapons and it’s still unclear if one of their bullets struck and killed Gary. Neither of the officers had working body cameras.

Which is why family and friends united, holding powerful messages hoping their efforts could reach the jury that will soon decide.

“I’m hoping that the grand jury takes a non-racist look at all of the evidence,” said Pastor Amy Debeck.

“I hope that the grand jury will look at everything objectively and bring the evidence toward justice,” added Councilman Dwight Fish.

In an exclusive interview with Sandy Holt, Gary’s other sister, she says as a community they did something that could change many perspectives.

“We all laid on the ground for nine minutes for every hour Norman Gary laid there to his death. Aid wasn’t sought for him. They failed to get the ambulance,” she said.

On Saturday ABC57 news first you a heartbreaking video was released showing what exactly happened moments after shots were fired.

“His last words were take care of my kids,” said Holt.

And that’s what family members say Norman Gary was about: family and love.

But this fight for justice is just beginning. Holt tells me this isn’t a race issue; this affects Elkhart as a whole.

“We have to say no more. We’re not going to have it. Right is right.  This is not a black thing this is not a white thing. This is about us as the people no matter what color you are.”

This grand jury will meet for at least one more day.