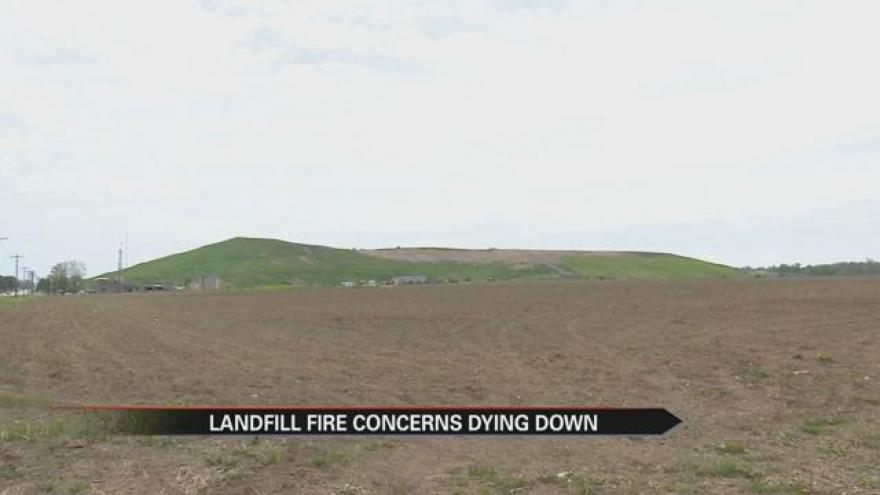 After three days of battling an Elkhart County landfill fire some crews can start to take a break.

The Red Cross and fire crews have packed up. According to Concord Fire Department Chief crews from all over the county , and even parts of Michigan, were lending a hand.

The Elkhart County Sheriff’s Department says the use of all fire department water equipment is no longer being used; it has been placed on standby.

Tim Horton, a Waste Management representative says hot spots are still a main concern, but at least now the flames are out.

“Any time we see areas that appear to have smoke plume or there’s a concern of fire they’ll continue to add soil to those areas because it was only soil that could prevent the wind erupt again,” he said.

Horton  says crews have been making progress on those hot spots at Earth Movers Landfill. “What you see on top of the landfill right now is actually an area that’s been entirely covered in soil about a foot and a half thick.”

And according to the sheriff’s department the fire is fully contained with 90 percent of it covered in soil.

“The actual smoke column and the vapor material has been greatly reduced, I was really glad to see that this morning,” says Chief Rick Rochford, with Concord Fire.

Rochford adds Wednesday morning about 300 firefighters have had boots on the ground and more than 7,000 gallons of water have been used.

No cause has been determined and neither has how much these efforts will cost.

“We haven’t even gotten to that part yet. We’re still working on trying to resolve the incident and make sure this is going to be 100% taken care of,” said Chief Rochford.

Questions remain about air quality since this fire had been going for days, but again Horton says this facility does not handle hazardous materials.

“We’re regulated by IDEM and EPA and they govern our operating guidelines. You can’t give drive into that site with a truck load of material unless we know what’s in it.”

Both Horton and Chief Rochford say if the winds weren’t so strong, they likely would have been able to extinguish this fire when it started two days ago.