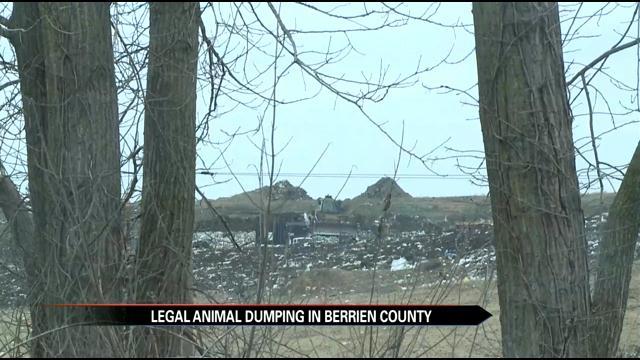 The general manager at the landfill said that "trash is trash," and legally he can't discriminate because according to the State of Michigan, dead animals are considered trash too.

Residents who live by the landfill are worried that the influx of carcasses will create a bad smell.

Brad Brown said, "I mean we don't really smell the landfill here, but if they continue to dump dead animals, I think we would!”

Brown said his wife has seen the St. Joseph County Humane Society trucks visit the landfill but he didn't know why.

Brown said, "I wouldn't say I'm shocked but I'm surprised. I just assumed they cremated all the animals! it's surprising!”

Officials at the landfill said the carcasses are put into a pit with the other trash.

Brown said, “It's not eerie it just doesn't seem right. There's other places they can take the animals.”

The assistant director at the St. Joseph County Humane Society said her staff loves animals, so the backlash has been hard to handle.

Jenny Carlson said, “Unfortunately we don't have the extra thousands and thousands of dollars to have a crematorium here and the City of Mishawaka won't allow us to have one here because of zoning ordinances.”

Carlson said they had a meeting in November for concerned citizens to voice their opinions.

The co-founder of Pitbull South Bend said the county's animal disposal techniques are only a symptom of a greater problem.

Gabrielle Thompson said, “The bottom line once again is accountability, cooperation, and transparency. Something needs to change there because they have a horrible reputation and we offered our help to help change that. The laws are changing. The leaderships needs to change. And change is what we are asking for!”

The St. Joseph County Humane Society said they are open to suggestions, and you can schedule an appointment with a board member.