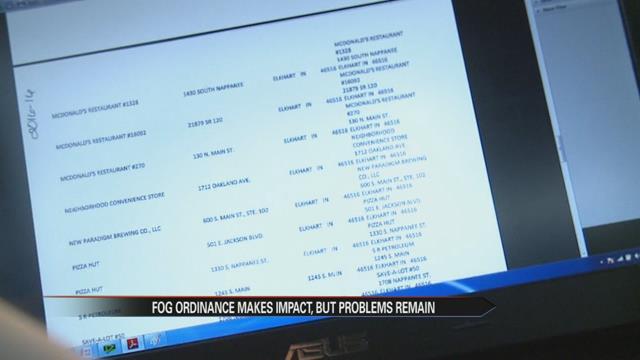 Eight months after enforcing a fats, oils and grease ordinance it is still a messy topic in the city of Elkhart.

In 2014 discussion between city officials and existing food service establishments began on how to control the amount of ‘FOG’ going into the sewage system.

The hope was to get a handle on it without using costly equipment.

In June 2015, an official ordinance was implemented. Officials say they have seen an improvement in some of their problem areas.

“Only one of those six [areas] had any build up of fats oils and grease so we are looking at it as definitely successful,” says Lynn Brabec, Environmental Compliance Manager with the city of Elkhart.

For new businesses the guidelines require an inspection from the health department, making sure they have up to date grease traps.

For existing businesses they had to register with the Public Works Department by September 2015 in order for the department to keep tabs on their ‘FOG’ output.

Five months after the deadline and 80 businesses have yet to register.

“It just appears that they don’t believe they need to do it they say we don’t fry we don’t use grease,” says Brabec.

Brabec says it’s important to get the food service establishment’s information in order to decrease the ‘FOG’ and protect Elkhart’s fresh water.

“It affects the water quality in the river. If there are blockages in the sewer whether it’s caused by from fats, oils, and grease or other reasons, untreated waste water goes into our rivers and streams,” says Brabec.

A list obtained by our reporting partners at The Elkhart Truth shows the 80 food service establishments that have not registered with the Public Works Department. One of them includes a downtown bistro, The Vine.

Whether a business has a fryer or not if you sell prepared food you have to register with the city.

“People seem to have the misunderstanding that they have an option to do this,” says Brabec.

There are some restaurants that have complied with the registration requirement. Manager at the Italian restaurant Michael’s says it is way less costly than making everyone install a new grease trap.

“It’s just, do your job. Maintain your equipment. Maintain your establishment, and if everyone would do their part then we probably actually wouldn’t be in this position we are in now,” says Rico Iavagnilio, Manager of Michael's Italian Restaurant.

The final deadline for food service establishments to register is Wednesday.

If restaurants do not register by Wednesday they could face a notice of violation with possible fines.

To obtain registration forms click here. All the ‘FOG’ documents are located at the bottom of the page.

Forms can be submitted in person at the Public Works and Utilities Department, by email, or by fax.