Deadly accident: Car vs. Semi truck on I-94 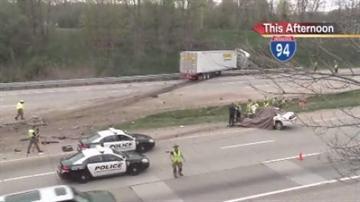 BERRIEN COUNTY, Mich. --  Two people died Sunday after a car hit an 18 wheeler on I-94 around 4:30 p.m. Police say a white 2004 Chevrolet Impala was driving westbound down I-94 when the driver swerved to miss some debris in the middle of the highway.

The driver then lost control, crossed the median and slammed head-on into a semi.

The impact crushed the front half of the car.

The sheriff says that the driver of the semi was not at fault.

As crews worked to clean up the crash, drivers sat and waited. I -94 looked more like a parking lot for miles.

As drivers crept by the scene, they realized just how devastating this accident was.

"It's going to be devastating for their families. I have children and I wouldn’t want to have to face that moment of the cops coming to the door and telling me. Terrible," said witness Deanna Chernetski.

Police say they see a lot of accidents caused by people swerving, while it’s a natural reaction, it may cost you your life.

"It's always better to run over anything or hit something than to swerve because so many times when people swerve they lose control and things like this happen," said Sheriff Bailey.

Police say the two victims are believed to be 19 year old girls from Holland, Michigan.  They will not fully release their information until the families have been notified.