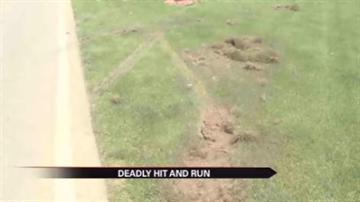 MISHAWAKA, Ind.-- Police say speed and alcohol are likely factors in an early morning deadly hit-and-run. Twenty-two-year-old Brandon Gonzales is in jail after police say he killed a bicyclist at the intersection of Jefferson and Buckeye roads.

Neighbors along Buckeye Road in Mishawaka say they're upset over what they call a senseless act.

"So he was coming fast enough coming from the south apparently and hit the car here- you can kinda see where it got pushed a little," said Dave Melander, resident. "And then he went across the street, went down to where that pole is, turned around and sped back."

What neighbors didn't know early that morning is that police say 22-year-old Brandon Gonzales had done more than just tear up their front yards.

"We didn't know there were some other things going on and unfortunately we found out later that a bicyclist had been hit around the corner," said Melander.

Police say the accused struck and killed 54-year-old Timothy Grant of Mishawaka who was biking to work.

Police say the suspect then fled the scene, sped north on Buckeye, hit a car, did a u-turn and spun out in several yards.

The suspect then continued in his Dodge Charger to his home on the 2000 block of Jefferson. It's there where police arrested him.

He is being held on $50,000 Corporate Surety/$5000 cash bond. His first court appearance is scheduled for Monday.