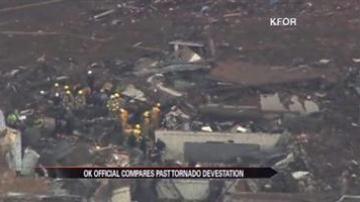 MOORE, Oklahoma — Monday's deadly tornado in Moore, Oklahoma comes 14 years after a series of tornadoes tore through the region and left 46 people dead.

In May 1999, a severe storm that covered Kansas and Oklahoma brought 74 tornadoes.

Monday's EF-4 tornado brought back memories of emergency crews who responded to the May 3, 1999 tornado.

A state official said tornadoes of this magnitude are not an infrequent occurence.

This is the fourth time in 15 years that Moore has been hit by a strong tornado.

Thirty-six of the people killed in the May 1999 tornado were in Oklahoma City.