Deadly three-vehicle crash shuts down US 20 in Elkhart County 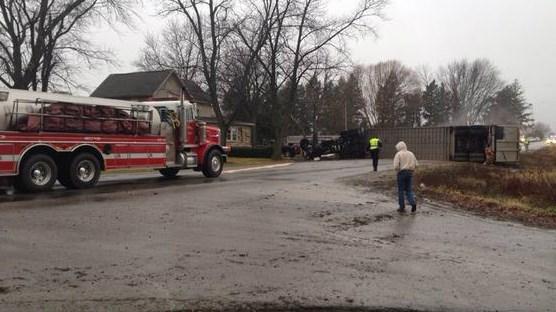 One person has died after a three-vehicle crash on U.S. 20 Tuesday afternoon, involving a semi and two other vehicles.

17-year-old Devin Steurer was sent to the hospital as well, but police say the driver of the semi truck, 68-year-old Carl Forgey, sustained no injuries.

Moses began to slow down to turn into a private drive east of the C.R. 33 intersection.

The front of Steurer's vehicle hit the back of Moses's car, according to police, causing Moses's vehicle to be pushed into the westbound lanes directly in front of Forgey's semi truck.

The semi then rolled onto its side and went off the south side of U.S. 20 and caught fire.

Moses died as a result of the crash.