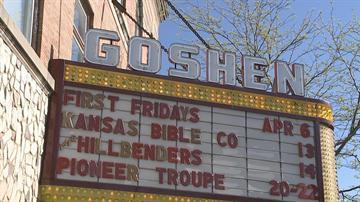 GOSHEN, Ind. – Goshen’s First Friday events draw 5,000 to 10,000 people to the city’s downtown each month, but some say the events also draw unruly and unsupervised teenagers.

Over the past few months, businesses and citizens have began to complain of vandalism, theft and other petty crimes being committed by teens during First Fridays.  Some also say some teens are disrespectful and block the busy sidewalks.

“You do have some of those kids that do have respect for others, but then you do have some that come out here and they’ll just stand in groups, they won’t move for you and you kind of have to go around them,” described Anna Bontrager at Aprils First Friday event.

Many have criticized parents who drop their kids off at the events and leave them unsupervised.

“I don’t think that they should drop their kids off and then expect other people to have to watch them,” Bontrager explained.

In March, the increasing complaints led Goshen’s Common Council to begin debating new ordinances aimed at tackling the problem.  One would prohibit anyone from blocking sidewalks during events.  The other would extend the city’s curfew for unsupervised kids under 15 from 11 p.m. to 9 p.m. on the night of First Friday events.

The First Friday celebration on April 6 was the first event since the new ordinances were proposed.  In response to the complaints, more Goshen Police Department officers were on patrol to keep order.  If the ordinances pass those officers could write citations to teens with fines of up to $500.

“I think if the kids had respect, none of these rules would have to be enforced,” Anna Bontrager said.

To combat the problem First Fridays has teamed up with the Boys and Girls Club of Goshen to offer more events for teens, such as dances.

Some teens at the April 6 event, like Bradley Stevens, said the whole controversy was overblown.

“I think it’s just honestly overreacting, I mean kids are going to want to have fun,” Stevens explained.  “There obviously should be some control out, making sure kids aren’t doing anything bad.”

Anna Bontrager agreed that perhaps some other options should be explored before the new ordinances were passed.

“Maybe those parents that drop their kids off, maybe they should come up here and see what’s actually going on,” Bontrager said.  “I think it starts in the home with the parents.”

The proposed ordinances passed their first reading before the Goshen Common Council meeting in March.  Both are expected to see a second reading at the meeting on April 17.