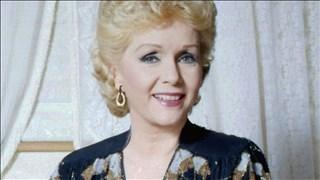 By Steve Almasy and Azadeh Ansari

It's unclear why Reynolds died -- she had complained of breathing problems, an unnamed sourced told the Los Angeles Times -- but she was reeling emotionally from losing her daughter, who was 60.

"She spoke to me this morning and said she missed Carrie," said Reynolds' son Todd Fisher. "She's with Carrie now. Reynolds' long career in entertainment

In late November in an interview on WHYY's "Fresh Air," host Terry Gross spoke with Fisher about her mother.

Though famous, the two went through the same evolution that many moms and daughters experience -- it can be feisty during the teenage years, and maybe into a daughter's early 20s, but as the child ages, she begins to appreciate the wisdom, power and experience of the woman who, despite obstacles, raised her, lived as an example to her, loved her without condition.

"I could appreciate -- she's an immensely powerful woman. And I just admire my mother very much. She also annoys me sometimes when she's, you know, mad at the nurses," Fisher said, referring to a time years ago when Reynolds was ill. "But, you know, she's an extraordinary woman, extraordinary.

"There are very few women from her generation who worked like that, who just kept a career going all her life and raised children and had horrible relationships and lost all her money and got it back again. I mean, she's had an amazing life, and she's someone to admire."

Gross asked if Fisher admired her mother's strength and accomplishments as Fisher got older.

"Oh, God, yeah. No, when I was a kid, I just thought she was someone who was telling me what to do. And I didn't want to do it."

Reynolds was one of Hollywood's biggest stars in the 1950s and 1960s. Born Mary Frances Reynolds, she was a bubbly singer, dancer and actress who starred in "Singin' in the Rain" and "The Unsinkable Molly Brown."

Gross asked Fisher in November what it was like being raised by a famous mother.

About "Singin' in the Rain," Fisher said she "always liked it." "It's brilliant," she told Gross. "I mean, to do the transition from sound -- from silent to sound is a brilliant, brilliant time to focus on. And what was interesting to me is that there's three people acting in the movie then. It's two men and a female. And it's the same with 'Star Wars.' And both movies were sort of, you know, iconic at the -- well, they did the AFI 10 top films, and one was 'Singing In The Rain' and one was 'Star Wars.'"

Fisher, whose grit and wit made "Star Wars'" Princess Leia an iconic and beloved figure to millions of moviegoers suffered a cardiac event on a flight from London to Los Angeles and died days later.

'She was so respectful and caring'

Reynolds' publicist Ed Lozzi spoke lovingly of her this week, saying that despite her star power, she treated everyone with respect.

"The people that worked for her ... she was just so respectful and caring and thoughtful to her publicists and her agents," Lozzi told CNN. "A lot of stars we worked for were not. She was special that way."

Reynolds' film career began after being spotted in a beauty pageant at age 16. She became famous when she was picked to co-star with Gene Kelly and Donald O'Connor in "Singin' in the Rain," one of Hollywood's best-known musicals.

She married, then famously divorced, singing sensation Eddie Fisher, who left Reynolds for Elizabeth Taylor in 1959.

"I have no regrets about my career. I'm just thrilled I've had it," she told CNN's Larry King in 1990. "You know, it stood by me. Marriages failed; my career always stayed. It gave me the fun of life, you know. It allowed me to travel and meet wonderful, funny people."

On Wednesday, King tweeted: "Debbie Reynolds was pure class. She was loving, talented, beautiful, unsinkable. I feel sorry for anyone who never got a chance to meet her."

Though she stepped away from film for much of her career, Reynolds continued to entertain on Broadway stages and in Las Vegas nightclubs. She also appeared on many television shows, including one of her own -- "The Debbie Reynolds Show" -- that lasted just one season.

Actress Ruta Lee, a longtime friend of Reynolds, told CNN affiliate KABC that Reynolds used her celebrity to help others.

"I was blessed by the almighty in having this wonderful sister who taught me so much in life," she said. "Debbie was without a doubt one of the most generous, wonderful, loving human beings that God put on this Earth."