Deceased candidate in race for coroner 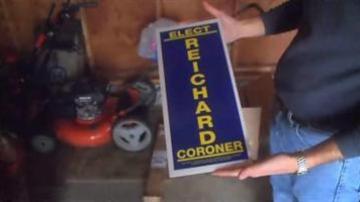 LAGRANGE, Ind.-- The democratic candidate for the LaGrange County Coroner race died unexpectedly this week, leaving the party without an option just days before the election.

When Mark Eagleson found out Bob Reichard, his friend of 20-plus years and pick for county coroner passed away earlier this week, he was shocked.

"It just hit," said Eagleson. "Death happens everywhere, and can happen anytime to anyone of us."

Eagleson is Chairman of the LaGrange County Democratic Party.

He's worked hard over the years to get like-minded candidates elected. A process, that isn't easy in a county where Republicans dominate nearly 2-to-1.

"It's difficult to elect a Democrat on a county-wide race in our county," said Eagleson.

The race for County Coroner was one of just a few that Democrats had a clear shot at winning, but after Reichard's death, Eagleson isn't sure on how to move forward.

Indiana State Law allows new ballots to be reprinted, but that would cost over $20,000 and be at the expense of the county.

A move that would be politically unpopular.

"I sit back and wonder, and think, 'Is that fair to taxpayers?'" asked Eagleson. "To try and put that type of burden on them or the County?"

His other option is to wait a few days before the election, and hope that there are enough straight-ticket votes to beat out the Independent candidate.

But that's easier said than done.

Democrats usually get around 300 to 400 votes per presidential election.

In order to qualify, the Independent candidate had to register at least 250 votes, making it a close race already.

"I'm not aware of ever hearing it happening before," said Eagleson.

So until state law changes, he and other party leaders are left without a decision or candidate just days before the election.