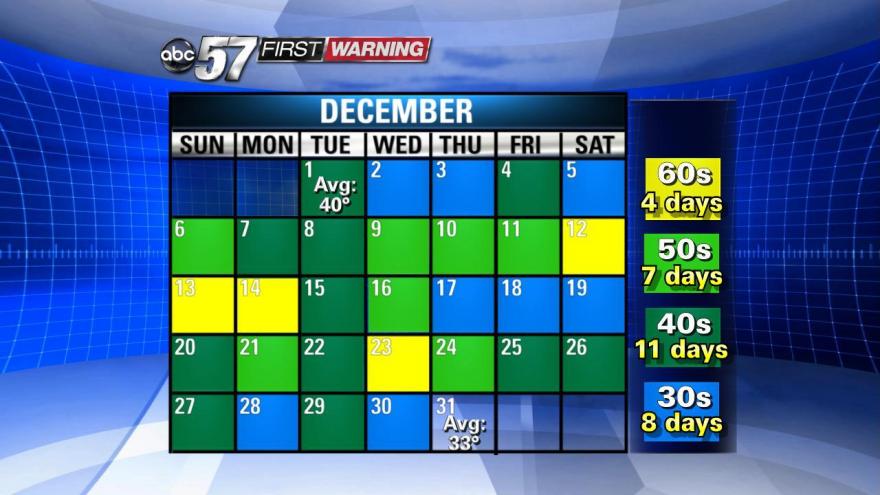 Update with the final temperatures in for the 31st. It looks like the monthly average temperature will be around 35.5 degrees, still way ahead of the record set back in 1982. A half a degree may not seem large but when dealing with monthly averages it is significant. This month saw 25 of the 31 days with above normal temperatures. With El Nino being the big topic this winter, it seems to have already made its existence known to the Midwest, especially hear in Michiana.  Typically during an El Nino pattern, temperatures run above normal while precipitation is below normal.  This “typical” pattern can also be used in summarizing the month of December 2015.

The warmest day this month was 63° on the 13th, but that was not the only 60 degree day in the month.   We saw an additional three days with highs in the lower 60s mid-month (Fig. 1).  Typically, the normal high for December in South Bend ranges from 40° on the 1st and drops to 33° by the 31st.  With those normal values in perspective, 26 out of the 31 days in the month saw above normal high temperatures.  That’s nearly 84% of the month.

With such a warm December, it’s no wonder that (for the second year in a row), this is one of the least snowy Decembers on record.  Fig. 3 shows the December 2015 calendar indicating what day we saw rain, snow, or none of the above.   Out of the 31 days, seven days observed snow.  Out of those seven days, 1.4” of snow was recorded (Fig. 4).  That’s at least an inch more than the amount of snow we saw last December (December 2014 was the least snowiest December ever with just 0.2” observed).  That places December 2015 in the top 5 for the least amount of monthly snowfall for December.  Normally, a December in South Bend produces at least 17.0” of snow.

As we look ahead to the first week of January 2016, it will be a frigid first day of the new year, but a warmer pattern shifts in just in time for the start of that first full week of 2016.  Stay tuned to ABC57 News on the air and online here for the latest forecast updates.  In the meantime, on behalf of the ABC57 First Warning Neighborhood Weather Department, we hope everyone has a wonderful New Year's and we thank you for trusting us with your weather updates in 2015.