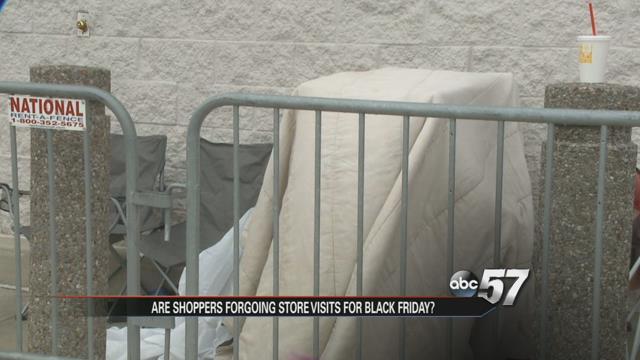 After years of backlash for opening on turkey day, retailers appear to be finally holding the line on those earlier and earlier Thanksgiving openings.

ABC 57 has been tracking the shopper flow throughout Michiana since Thursday morning, asking locals what items were worth waiting around in lines for.

Alley Taylor, an Elkhart resident, told us that she was waiting in line for 12 hours for the new TV her dad wanted.

“We are just going to wait it out until they start passing out the tickets and stuff.”

But, we did notice, that the lines and congestion were nowhere near as big as previous years.

Melody Hahm, from Yahoo Finance, says that’s because “a lot of retailers are scaling back their hours or even closing their stores entirely because they realize that it actually doesn't help their bottom line.”

And Taylor agrees. She told us that she doesn’t even enjoy Black Friday shopping.

“It makes my dad happy so it's worth it for me. That's all it is for me though. It's worth it to him I guess.”

But like many consumers, she tells us she’d rather just shop online.