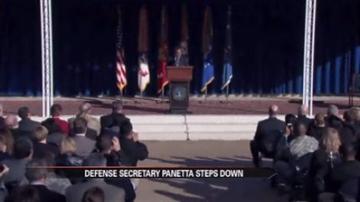 ARLINGTON, VA. -- Another member of the President's Cabinet is officially stepping down.

Defense Secretary Leon Panetta made his farewell address Tuesday at the Pentagon.

He is the second member to retire this month. Former Secretary of State Hillary Clinton left her post in early February.

The panel is expected to vote on Hagel this afternoon. The senate could vote later this week.