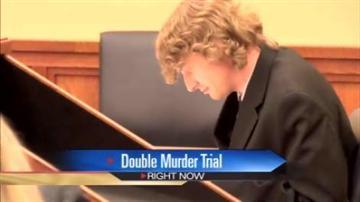 CASS COUNTY, Ind. -- On Tuesday, the Keith Lintz double murder trial starts up again after a three day weekend. By Tuesday the state has to hand over any search warrants not given to the defense as well as information regarding over 700 tips received in the case.

The lead investigator in the case, Detective Sergeant Fabian Suarez of the Michigan State Police, testified about the number of tips received in the case last week.

Lintz's attorney, Greg Feldman, wants to examine all the tip sheets to see if they contain anything that can be used in Lintz's defense.

"Mr. Lintz needs to know that I've seen them, that I've gone over them with them and been able to prepare a defense that takes those into account," said Feldman.

The tip sheets weren't the only thing the defense wanted. Suarez told the jury there were 30 search warrants issued in the case, but the defense was only given 21.

"These search warrants are obviously important because there was no physical evidence found at the scene that links my client to this crime," said Feldman.

The prosecution says Suarez must have overestimated and they are sure they turned them all over.

"Keep in mind, nothing was collected pursuant to any of these search warrants that's of any consequence in the case," said prosecutor Doug Baker to Judge Michael Dodge.

Feldman says he won't take the prosecution's word on something this important.

"Unfortunately, your honor, with no disrespect to anyone on my left, I can't trust that," said Feldman.

Feldman says the day the trial began, the prosecution gave him DNA test results of the hair that was found near the blood and footprints outside the home.

"That report excludes Mr. Lintz, Kieth Lintz, as a potential contributor to that," said Feldman.

As of Friday, the prosecution and the defense were trying to come to an agreement on how to handle presenting that evidence to the jury.

"We're at a point where the witness from Pennsylvania that did the analysis would have to be brought in," said Baker.

That is unless they can come up with a different solution.

Judge Dodge told the prosecution and defense if they can't agree, he may have to step in.

The judge also told the prosecution they have until Tuesday to make copies of all of the tip sheets and any search warrants they haven't already given the defense.

Lintz is accused of beating, stabbing and shooting John and Carolyn Tarwacki in their Niles, Michigan home in February 2010.