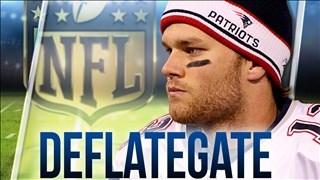 Berman's three options were to uphold Brady's suspension, overturn it or send the case back to an arbitrator.

His ruling concluded with these words: "Brady's four-game suspension is vacated, effective immediately."

But the legal battle may not be over.

Berman's ruling can be appealed, and the losing side is expected to take its case to the 2nd U.S. Circuit Court of Appeals. A stay of the decision also could be sought.

The controversy began when the New England Patriots were accused of using underinflated footballs to gain a competitive advantage in the Patriots' AFC championship victory over the Indianapolis Colts in January. The Patriots won that game by a landslide -- 45-7 -- and went on to win the Super Bowl in a thrilling last-minute finish.

The NFL hired high-profile attorney Ted Wells to investigate. The Wells Report found that "it is more probable than not" that John Jastremski, the Patriots' attendant for the game officials' locker room, and equipment assistant Jim McNally deliberately deflated the balls after referees had inspected them.

"It also is our view that it is more probable than not that Tom Brady (the quarterback for the Patriots) was at least generally aware of the inappropriate activities of McNally and Jastremski involving the release of air from Patriots game balls," the report said.

The NFL punished Brady with a four-game suspension, but Brady denied involvement and appealed the decision. NFL Commissioner Roger Goodell upheld the suspension, and both the NFL and the players association filed to have the suspension's validity decided in federal court.

The New England Patriots' first regular-season game, against the Pittsburgh Steelers, is scheduled for September 10.