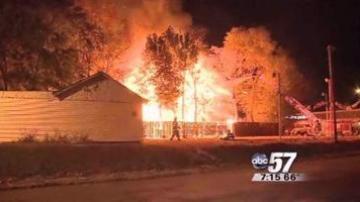 SOUTH BEND, Ind. -- South Bend firefighters had a busy morning on Wednesday. Crews were called to a fully engulfed home on Michigan Street around 6:15 a.m.

The flames were already out of control when South Bend firefighters got to this home. The scene looked all too familiar.

"I know it caught fire at about 4 a.m. and about 6 a.m. it caught blaze," said James Ford, who owns the bar next door.

Firefighters realized this was a home they had already seen before in a previous fire.

"They did have a fire there back on April 26 also," said Fire Marshall Federico Rodriguez.

The house was abandoned and no one was hurt in the fire, but firefighters say homeless people have been in and out of the house.

"The inspector was here. They thought they were going to find the ashes of my body in there, but I was nowhere to be found," said Mark Russo, a homeless man who was living in house that burned down.

Firefighters say the transients that lived in the house may have started the fire, but they may never know for sure, because they had to knock the building down.

"We would have liked to have gone in to see what could have caused that fire, but because of the stability and safety of patrons right next door to an establishment, we had to make sure that the area was protected,” said Fire Marshall Rodriguez.

One thing firefighters do know for sure, there won't be homeless people living in this house anymore.