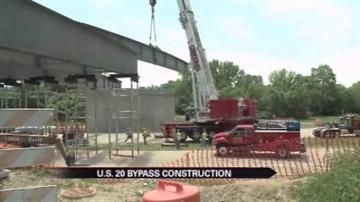 SOUTH BEND, Ind. — Drivers have been experiencing delays every 20 minutes or so along the US20 bypass all day.

Crews have been using heavy machinery to install beams for the new Fellows Street bridge.

According to INDOT, the exits at Ironwood and Michigan Street remained open but drivers were stopped every twenty minutes or so.

It caused a mess during rush hour, but is fascinating to some bystanders.

"Interesting! Interesting! Especially since I'm retired I can get out of my wife's hair,” said Abraham Ropp, retired carpenter.

Ropp is fascinated by the construction process unfolding before his eyes.

“Right here you get a good view, right here,” said Ropp. "When I saw the scaffolding out there with the beams on there I thought, holy smokes!! I couldn't believe that!"

Crews have been working since early Wednesday morning to lay beams across US 20 --each estimated to weigh more than 100,000 pounds.

"It's very important. It's all a part of the new 31. Ultimately this is not going to be part of US-31 itself. This is the Fellows Street Bridge. This is a bridge we're doing to allow neighbors to access their neighborhoods that would effectively be, certainly cut off by the new US-31,” said Matt Deitchley, INDOT spokesman.

To lay the beams-crews are shutting down the bypass in all directions for 20 minutes at a time. Ultimately leaving drivers stranded and frustrated

But as Ropp pointed out, it could be worse.

"It's either that or shut the whole thing completely down. This way after the 20 minutes, the traffic can flow again. That's part of construction, when you travel you run into it all the time,” said Ropp.

The closures are expected to end Wednesday, but INDOT officials say any unforeseeable delays could lead to some lane closures throughout the week.