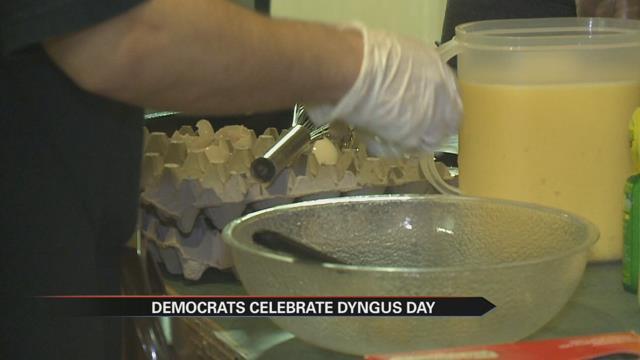 The morning started early for the St. Joseph Democratic Party on Monday. At 5 a.m. the group gathered at the UAW Local 5 in South Bend to begin preparing food for the day.

"It's food. First and foremost people hear food. It's a good breakfast, you know we got all the fixins' and usually we have candidates from down state bring in people from all over the area just trying to get their name out there and be recognized," said Joe Taylor III who is UAW Local 5 President and also running for Indiana State House District 7.

Dyngus Day marks the end of Lent and the fasting season. For elected officials and political hopefuls it is a day to rally for the upcoming Indiana Primary Election that will be in May.

The breakfast began at 8 a.m. and will go until 10 a.m. That is just one of several places hosting Dyngus Day celebrations. Politicians listed on the May ballot are expected to come out, shake hands, and meet with the community in an attempt to garner support for their campaign.

Taylor summed up what Dyngus Day really means to the community and politicians.

"Good food. Good people and a good time with politicians coming out to see those who want to get elected, find out who you want to support in the election cycle," added Taylor.