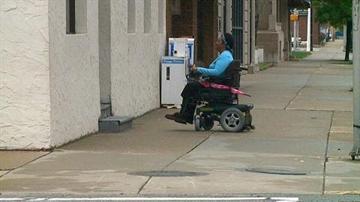 SOUTH BEND, Ind. – The plea of a wheelchair-bound woman are falling on deaf ears at the Democratic Party Headquarters in downtown South Bend.

For nearly four years, Karen Brandy-Comer has tried to get St. Joseph County Democratic Party Chairman Butch Morgan to do something, anything, to help her have better access and service to the building. Brandy-Comer is a registered Democrat, unafraid of calling her own party out on this issue.

The first time Brandy-Comer experienced a problem was when she was running for a school board position during the 2008 General Election. “I wanted to go in the office to volunteer to possibly get some help with my campaign but; I couldn’t get in the office,” said Brandy-Comer.

From the first time she attempted to gain access to the building, which has just two doors both of which require the ability to navigate up stairs to reach, she feels her needs have been overlooked. “That’s just ridiculous; there should not be a building in the United States that I can’t just roll into,” said Brandy-Comer.

It was after one of these window assaults, during the mid-term elections of 2010, she thought her luck had changed. Brandy-Comer says, U.S. Congressman Joe Donnelly happened to be at the office and came to the door.

After explaining her situation, and showing him the state both entryways were in, she says he made a commitment to her. “He said, I promise you I will fix this,” said Brandy-Comer. She also says, that was over a year and a half ago and nothing has changed since.

In the meantime, Brandy-Comer has made several trips in her motorized wheelchair to the party headquarters, trying to catch Morgan. She says, Morgan is a difficult man to get a hold of, “I’ve talked to Butch one time. And every other time I go over there, he’s just left or he’s in a meeting and he can’t come to the door,” said Brandy-Comer.

Jokingly, she bet we would get the same result when we arrived Wednesday afternoon. Sure enough, after she beat on the window a few times, someone came out to see what she wanted.

After introducing ourselves, we were told Morgan was in a meeting. Brandy-Comer just laughed. For her, it was par for the course.

Brandy-Comer told us of the one time she did get to talk to the county chairman. She says, he promised to make a call and line up a portable ramp and install a doorbell that people could use to signal those in the office someone was waiting outside.

As of Wednesday, no doorbells are present and no signs of a portable ramp have been seen. “He lied. He straight out lied, and it’s obvious that he lied because there is no ramp, there’s no starting to be a ramp, I mean there’s nothing,” said Brandy-Comer.

Brandy-Comer says, Morgan’s blatant attempts to ignore her concerns, and his refusal to accommodate her even with a face to face meeting, makes her feel like a second-class citizen. “They want us to be involved in our city’s government. How can I be involved if I can’t get in?” questioned Brandy-Comer.

It’s a question I posed to Mark Dubin, former senior trial attorney for the Department of Justice (DOJ), Civil Rights Division, Disability Rights Section from 1993 to 2005. Dubin was responsible for the enforcement of the Americans with Disabilities Act (ADA) and Section 504 during the same years.

However, if the situation is as bad as it is described, he thinks the people in charge of the location simply need to be educated on the need for access and the ease at which it can be provided. Dubin goes on to say, the headquarters should be made accessible and; if it cannot be made accessible, it should move to a location that is. “The Democratic Party and the Republican Party both have a legal obligation and a moral obligation to ensure that the community can access whatever it is that they are offering,” said Dubin.

Dubin also raised the issue that many people who have these types of allegations levied against them often look at the issue as a building code violation. He says it is not, and should be approached as a civil rights matter.

Earlier this year Democratic Party candidate for U.S. Congress in Indiana’s second district, Andrew Straw, filed a complaint, with the DOJ, against his own party because of this issue. Since then, the DOJ has responded to Straw, telling him they would do nothing about the situation.

However, the correspondence goes on to inform Straw that the DOJ decision does not mean a violation does not exist and that there are other options he can exercise, including civil court. Straw has since filed a complaint with a civil liberties union and is awaiting a response from them.

Meanwhile, Brandy-Comer continues to want to participate in the democratic process, with the Democratic Party and; she does not want to be treated any differently than a person without a disability. “I was told at one time, ‘well you can make calls from your house.’ I don’t want to do that. I want to get in [the Democratic Party Headquarters] building,” said Brandy-Comer.

Still, what hurts Brandy-Comer the most is the betrayal from her own party. “They should be ashamed of themselves, they really should,” said Brandy-Comer.

Especially when, according to Brandy-Comer, helping her and the many other disabled voters that want to participate in the Democratic Party really is not that difficult. “I’m sure [Morgan] could get volunteers, Democratic [Party] volunteers, to donate materials or do whatever but; he’s not trying. I don’t think Butch is trying,” said Brandy-Comer.

According to a confidential source inside the St. Joseph Democratic Party, Brandy-Comer’s accession may be right.

ABC 57 tried contacting Morgan several times on Tuesday and Wednesday this week, both by phone and in person at the party headquarters. A phone number was left with a staff, and a request that he contact us as soon as possible was left with another.

On Wednesday, I was told Morgan was in the building but in a meeting. None of our requests for a phone call have been returned, and the voicemail on Morgan’s cellular phone is full.

Repeated calls to the number we were provided went unanswered despite the fact a staffer had recently finished a telephone conversation with him, calling the same number.